For those Steampunk fans that live nearish London, Kew Bridge steam museum is currently running a Steampunk exhibition until the 29th of August. They are also having a few themed weekends with workshops and whatnot. This weekend is a steampunk fashion theme 'Fashion Punk'. There will be workshops, competitions and stalls during the day, and a fashion show in the evening on Saturday.
According to the website, future event themes include Steampunk music, and making Steampunk related 'gubbins' (for want of a better word) among other things.
The museum also has a nice steam railway, and some very impressive steam engines, including the worlds largest working beam engine.
Even better, you only have to pay the entry price once, and it gets you into the museum for the rest of the year.
I'm going dressed up in my finery with a couple of friends. Look forward to seeing you there!

(Note, I don't actually work for the museum, this just looks like a mighty awesome series of events, in a very cool place).

I understand that this is extremely short notice but we were just aloud to publish something with in the playbill that makes it worth seeing who would wish to be part of it as well. 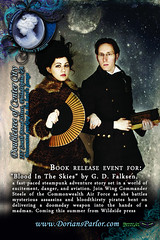 I am certain you are all aware that this July 16th in Philadelphia the one year anniversary of Dorian's Parlor One Year Anniversary is talking place.

We have been extremely fortunate and privileged via Wildside Press to be aloud to publish exclusively the prologue and first chapter to the debut novel of G.D Falksen's The Hellfire Chronicles: Blood In The Skies. This means the playbill we are publishing and handing out for free to more than the 500+ attendees at our great event will include not only full color playbill of all the entertainment, performers and vendors of the event but also a preview of a book just out this July. Due to this special collector's item we now feel it is appropriate to open our playbill up for you to place your advertisements within its pages. But due to time constraints with the event we are only open to all ad slots for the next 24 hours from now, unti ll 6am Tuesday EST. So please if you wish be part of this ever growing fantastic night now is your change to have your ad within the pages of our collectable playbill with exclusive printed material.

I would love for the playbill to be full of nothing but ads for the fantastic fashion and accessory stores and such I see post here all the time.

It should also be noted that during the event we are having quite a large amount of press and media filming for documentaries and a number of other things so it is a chance to have your promotional material seen by members of the press and TV as well.

If you wish to jump on this short lived opportunity please email for ASAP info : apramagioulis@gmail.com


Thank you and I hope you come if you can. It's really becoming something special beyond the magic we do monthly at Dorian's Parlor.

This July 16th We are celebrating our one year anniversary! 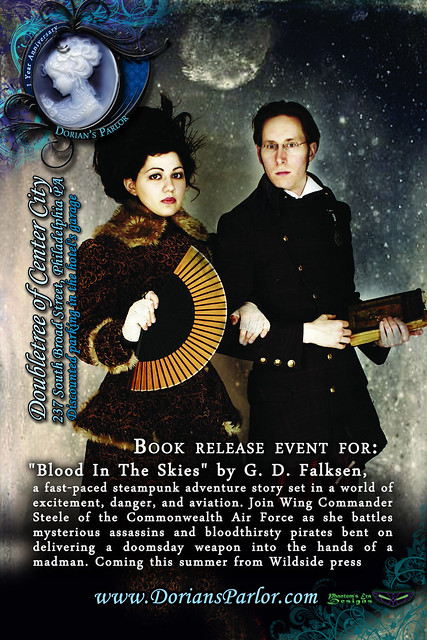 New jewellery! Plus Steampunk TARDIS necklace has been restocked - hurrah! Available only at Brilliant Aether

Also... check out the Brilliant Aether Facebook page to keep up with my latest creations, spontaneous giveaways and secret specials...

Just wanted to let you all know that we are having another Bats Day Black Market in November. This is going to be a Holiday Black Market. We are also looking for more vendors to vend at this great event. To download the vendor pack which includes application and floor plans please go here: http://www.batsday.net/events/bdhbmvendorpack2011.zip


If you dont vend you should still come out and do some holiday shopping.

If you have not vended at one of our shows here is some quick info that you may find helpful.
( info under the cutCollapse )

Is any one here going to this?


Also if you like to read steampunk books a new group has been made just for you over at the great site Goodreads.com
http://www.goodreads.com/group/show/49507.Steampunk_Reads

All these newfangled gadgets. Where will it end. This July 16th We are celebrating our one year anniversary!
http://www.doriansparlor.com/

Do dress to the nines in Dandy, Steampunk, Neo-Victorian, Neo-Vintage, Black Tie

$25 gets you admission, drink ticket, and Hors D'oeuvres

One year ago we opened our doors to you and most importantly you came. You came dressed to the 9s and became part of our monthly event. You saw and experienced the fantastic roster of award winning and incredible preformers, bands, artists and fashion designers. Without you we would be nothing and thus we now celebrate our one year anniversary by tossing the biggest and best party ever just for you, our beloved guests.

As always, the whole evening has been formulated like a fine elixir to amuse, tantalize and amaze you.

We are honored to have the exclusive release event for G. D. Falksen's debut novel “Blood In The Skies”, a fast-paced steampunk adventure story set in a world of excitement, danger, and aviation. Join Wing Commander Steele of the Commonwealth Air Force as she battles mysterious assassins and bloodthirsty pirates bent on delivering a doomsday weapon into the hands of a madman. Coming this summer from Wildside Press. Penned by G. D. Falksen fantastic illustrations by Jeni Hellum. We are lucky to offer you not only the first glance at this great book but also be privileged to hear a reading by the author and illustartor done in a classic radioland performance style, a treat not to be missed.

With such incredible music acts as "This Way to the Egress!", whose debut album is out soon; and the immortal and world famous Voltaire, who will serenade you of the wonders of being Evil while masterfuly playing his guitar. You know these performers' talent and music, and now is your chance to see them at Dorian's Parlor.

We are honored and very fortunate to have fashion designer Anthony Canney, head of the design house The House of Canney, where the trends from history never looked so fresh. Specializing in bespoke, historically inspired fashion and corsetry, Canney has traveled half way across the contury to show you his latest designs on gorgeous models in our fashion show.

And that's not all. We have dozens of one of a kind venders eager to sell you their great wears, preformers yet to be named (we must keep some surprises), glorious food and drink, and one of the best DJs out there, DJ Dave Ghoul, spinning song after song to keep you dancing the night away. There will be a vintage style photo booths to capture your evening with our talented photographers. We will have a mountain of door prizes and give aways from such places as Wildside Press, Retroscope Fashions, Steampunk Tales and many more all just for you. Prehaps a special bit of cake to celebrate a year of letting us entertain you. So come to our birthday party dressed your best and ejoy the spectacle we have prepared just for you. You will will not want to miss the event that surely will be totted as one of the parties of the year.

( Come to the event of the yearCollapse )
Hi, folks! Sorry for the hiatus, but Flights of Industry is back in action.

Got a few new items listed, including a sculpture, some ornaments, and 2 miniature boilers!

More ornaments are under construction, so there should be quite a selection growing there through the summer. But don't wait until Christmas to get the one you want! Each one is different, and you don't want to miss the REALLY CUTE one, eh?